Ever wonder how to use colons and semicolons? In this edition of PEGblog, Lyn Aecer attempts to win over some editors to the use of these marks while they improve texts.

This article appeared under the heading Colons and semicolons: More honoured in the breach than the observance? in PEGboard October 2018.

Many a time and oft I encounter writers and editors who openly admit to being ignorant of the purpose or correct use of the colon and the semicolon or of being afraid to use either. Then there are those who use them incorrectly. Most authors opt for the ‘safer’ comma or full stop. The guides on punctuation, however, advocate the use of the colon and the semicolon not only for their ability to refine or embellish writing but also to ensure that an author’s meaning or intention is conveyed clearly through the adept use of these two forms. They are not identical, though: the colon is the weightier of the two. This article is an attempt, then, to win over some editors to the use of these marks while they improve texts. 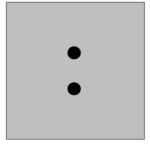 The colon is a mark of anticipation (Venolia 1995:12), what Lukeman (2007:76) calls ‘the magician of the punctuation world. It holds the audience in suspense, waits until just the right moment, then voilà: it pulls back the curtain to reveal the result.’ Put differently, in the words of the inimitable HW Fowler, the colon’s function is ‘to deliver the goods that have been invoiced in the preceding words’ (cited in Carey 1983:35). Gowers adds that ‘it is still useful as something less than a full stop and more than a semicolon’ (1962:239).

Here are some examples of its usefulness:

She said: ‘It will never work.’

He retorted that it had ‘always worked before.’

The learned judge also pointed out that ‘section 2(b) of the Act applies in this particular matter.’

She had come here in 1949 after losing everything in China: her mother and father, her family home, her first husband and two daughters, twin baby girls.

In some cases the executive carries out most of the functions: in others the delegation is much less extensive.

News reaches a national newspaper from two sources: the news agencies and its own correspondents.

The ingredients of a diplomat’s life are as follows: protocol, alcohol, and Geritol.

The following articles were found in his pockets: a wallet containing notes and small change, an empty brandy flask, a tobacco pouch, two pipes and a matchbox.

I grabbed my bag, put on my coat, and stepped out of the door, as I wasn’t coming back.

I grabbed my bag, put on my coat, and stepped out of the door: I wasn’t coming back.

The living room was immense, the kitchen spectacular, the two billiard rooms offered a water view and the six fireplaces were always lit. It was a palace.

The living room was immense, the kitchen spectacular, the two billiard rooms offered a water view and the six fireplaces were always lit: it was a palace. 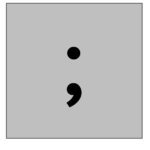 Of this mark, The Economist says: ‘The much-reviled semicolon is often worth an airing’ (2018:122). Gowers is charitable towards it: ‘Do not be afraid of the semicolon; it can be most useful. It marks a longer pause, a more definite break in the sense, than the comma; at the same time it says … [the] semicolon is a stronger version of the comma’ (1962:258). For example:

The scheme of work should be as comprehensive as possible and should include gymnastics, boxing, wrestling and athletics; every effort should be made to provide facilities for swimming.

The semicolon provides a stronger break than a comma, a weaker one than a full stop, but its very form (;) betrays the fact that it is both full stop and comma. The comma would be incorrect without the insertion of a conjunction; the full stop creates too much of a disconnection between related ideas or facts. Best thought of as a bridge between two complete sentences, making them one, the semicolon is a useful punctuation mark that a careful writer employs to good effect (Carey 1983:37; Gowers 1962:258; Lukeman 2007:56; The Economist 2018:124; Venolia 1995:38-40). The passage below illustrates the effectiveness of the semicolon as opposed to the full stop or the comma (Carey 1983:42):

The strikers agreed to resume work if a tribunal were formed to investigate their grievances; if on such tribunal the workers were adequately represented; if an undertaking were given that there would not, either now or at any future time, be any victimisation; and finally if it were guaranteed that, when the recommendations of the tribunal were announced, they would be put into force without delay.

The semicolons here cannot be replaced with full stops because they separate a series of subordinate clauses. Commas could be an option, but semicolons are preferred because the clauses are rather lengthy and some of them contain commas of their own. The semicolons serve to pick out the different conditions a little more clearly.

These are some instances where the semicolon is most useful:

The believer is happy; the doubter is wise. – Hungarian proverb

The frog is a unique creature; it lives both in water and on land.

The candidate could not be said to give a very good impression; he looked as though he needed a good wash.

Slipping and floundering for hours at a snail’s pace through mud and slime, long files of men went to and fro – carrying-parties with food, water, ammunition of all kinds, engineer and ordnance stores; forward observation parties with their wire and telephone equipment; stretcher-parties piteously burdened, reliefs bulky with arms and full pack and perhaps a parcel from home, struggling after the lightly loaded guide.

The company is doing some work on this, it may need supplementing.

The company is doing some work on this; it may need supplementing.

The postgraduate teaching hospitals are essentially national in their outlook, their geographical location being merely incidental.

The postgraduate teaching hospitals are essentially national in their outlook; their geographical location is merely incidental.

Projections were gloomy; however, sales skyrocketed.

The planned route was impassable; accordingly, the group investigated an alternative way.

They agreed on only three points: the ceasefire should be immediate; it should be internationally supervised, preferably by the AU; and a peace conference should be held, either in Geneva or in Ouagadougou.

It is not possible to pinpoint that as the cause of his allergic reaction, because there are several proven triggers.

It is not possible to pinpoint that as the cause of his allergic reaction; there are several proven triggers.

‘The semicolon elevates punctuation from the utilitarian to the luxurious. Business memos do not need semicolons. Creative writers do’ (Lukeman 2007:58).

Generally, the colon doesn’t combine well with semicolons (Lukeman 2007:90). A semicolon could possibly precede a colon, but that would probably lead to a sentence that reads awkwardly, so we have to resign ourselves to the fact that ‘there is rarely room for both of these giants in the universe of one sentence’ (Lukeman 2007:90).

The colon even detracts from the power of the full stop. For a full stop to have maximum power, readers shouldn’t be slowed at any point throughout the sentence, but the colon does just that, stealing the show (Lukeman 2007:89-90). Compare:

Every time I try to speak she interrupts me.

Every time I try to speak she does it again: she interrupts me.

Whether you edit fiction or non-fiction, I hope that this exposé of these two neglected but important marks has given you food for thought. And that when next you improve an author’s words, you’ll be able to find appropriate opportunities to convert their mundane commas and full stops into artful semicolons and colons.

Become a Member
Webinar Programme
Accreditation
← What does it mean to be a professional editor? Professionalism is rooted in skill and knowledge →
Manage Cookie Consent
To provide the best experiences, we use technologies like cookies to store and/or access device information. Consenting to these technologies will allow us to process data such as browsing behavior or unique IDs on this site. Not consenting or withdrawing consent, may adversely affect certain features and functions.
Manage options Manage services Manage vendors Read more about these purposes
View preferences
{title} {title} {title}